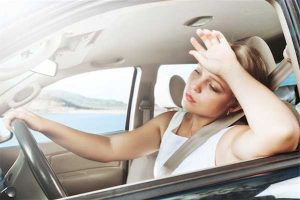 We’re overtired, overindulged and overstimulated and it is affecting our driving. In fact, recent data shows just how serious these issues, particularly drowsy driving, have become and automakers are making strides in doing something to help combat our bad driving habits and reduce the number of accidents on our roadways.

The risks associated with drunk driving and distracted driving have been widely publicized, but not as much attention has been given to the dangers of drowsy driving. A new study by the AAA Foundation for Traffic Safety found that it’s a bigger problem than originally suspected. In fact, the Foundation reported that 9.5 percent of all crashes in the study involved sleep-deprived drivers, as did 10.8 percent of the more serious accidents. This contradicts an earlier federal report that put the drowsy-driving accident rate at only 1 to 2 percent.

Most drivers admit to being aware of the risks associated with driving while tired, yet we still continue to fight the need for sleep. In the meantime, automobile manufacturers are looking for ways to help alleviate the problem. To learn more about this threat to roadway safety and what steps are being taken to combat it, read “Drowsy driving is eight times more prevalent than government data suggests, says AAA.”