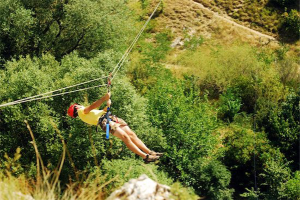 Zip lines can be found almost everywhere these days – vacation resorts, summer camps, even schools, farms and backyards vying to attract the adventurous. However, as the popularity of this activity grows, so does the number of related injuries according to a recent study published in the American Journal of Emergency Medicine.

The study looked at zip line activity between 1997 and 2012 during which time almost 17,000 zip line-related injuries, including cuts, sprains and broken bones, were reported. The majority of these injuries occurred between 2009 and 2012 at commercial zip line courses; so-called “amateur” zip lines accounted for only about 30% of the reported injuries. Currently, there are more than 200 commercial zip lines in this country; while amateur zip lines number in the thousands.

A recent Associated Press (AP) report titled, “Zip line popularity soars along with injuries, study says,” noted that this study indicates the need for more uniformed safety standards and regulations of the zip line industry. Currently regulations essentially are self-imposed and vary by state. In New Jersey operators are required to obtain a permit before operating a zip line; however, State inspectors perform “paper only” inspections, which involve reviewing the engineering plans, operations manual, and inspection and training records. Zip line operators are, however, required to hire an independent inspector for a hands-on inspection of their equipment, according to the National Association of Amusement Ride Safety Officials.