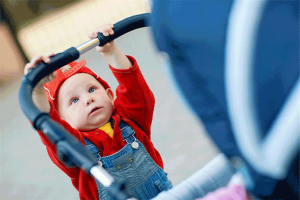 The U.S. Consumer Products Safety Commission (CPSC) last week announced the recall of nearly 5 million baby strollers and urged parents and caregivers to take immediate action to prevent possible injury to the strollers’ young occupants. So far, 11 injuries ranging from lacerations to complete fingertip amputations caused by a defective hinge have been reported.(1)

The affected strollers, sold under the Graco and Century brand names, were manufactured between August 1, 2000 and September 25, 2014. According to the recall notice, folding hinges on these strollers can trap a baby’s finger resulting in injury. Of the injuries reported so far, there was one laceration, and four partial and six complete amputations of the children’s fingertips.(2)

A report by Daily Finance noted that this recall is very similar to a 2010 recall by Graco and one of its competitors, MacLaren, adding that the earlier recall involved far fewer strollers. Then this past summer, Graco recalled about 4 million child car seats because of an issue with the buckles that posed a hazard of children being trapped in the seats.(3)

In response to this most recent recall, Graco is offering repair kits which will include a cover for the faulty hinges. These kits are expected to be available by December 1. In the meantime, parents and caregivers are urged to be diligent if using one of the affected strollers to make certain that it is fully locked after unfolding before putting their child inside. Parents are also being warned to remove their child immediately if the stroller should begin to fold while the child is inside.(1)

Even strollers not affected by this recall require the diligent supervision of adults to prevent injuries to children. According to the Keeping Babies Safe website, the most common injury related to strollers result from falls and almost 90% of these result in head injuries. The CPSC reports at least two deaths each year from stroller-related accidents. Most deaths occur when the children are left to sleep with the stroller in a reclining position because caregivers neglect to realize that even infants as young as a couple of weeks can move in their sleep. As the babies move, they slip through the stroller’s leg holes until their heads get trapped, which could result in suffocation or strangulation.(4)

Regarding the current recall, it is hoped that the repair kits and the interim usage advice will resolve the issue. However, an ABC News report pointed out that such safety recalls are seldom followed 100%. As a result, faulty products remain in the homes and eventually end up for resale with the issue never being corrected. Because of this, such manufacturing flaws continue to pose risks for years to come.(5)

Federal law prohibits the sale of recalled products, but the law does not impose any minimum effort that a company must make to get the word out about either a product’s recall or defect. According to government reports, only an estimated 20% of recalled products are ever accounted for or returned. That percentage can be as low as 5%, the reports continued.(5)

The recall affects 11 different models of single-seat strollers. To find out if a particular stroller is affected by the recall, look for the model number and date of manufacture which can be found on a white label that can be found at the bottom of the stroller’s rear leg by the wheel.(2)