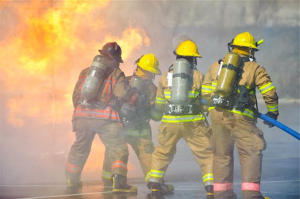 The seven-alarm fire that destroyed a luxury Edgewater, NJ apartment complex last month, leaving 1,000 residents without homes, has led to a class action lawsuit and a call from some State and local officials for a review of New Jersey’s current building codes.

The fire broke out in the late afternoon of January 21. Investigators believe it was accidental, caused by a blowtorch used by plumbers working on repairs to a first floor unit. The blaze, which spread quickly, destroyed about 240 of the complex’s 408 units, threatened nearby residences and, because it burned for so many hours, resulted in local roads and schools being closed the following day. Fortunately no deaths or serious injuries were reported.(1)

Fire officials have reportedly pointed to several factors as possibly contributing to the intensity and speed at which the fire spread.

Some of these factors led to the filing on January 26 of a class action lawsuit against the complex’s developer, AvalonBay. The lawsuit claims the fire was a direct result of negligence on the part of the developer since that company, along with any of its delegates, has the responsibility for constructing and maintaining the property in a safe manner designed to avoid injury and/or damage to property. The lawsuit further claims that the developer either knew or should have known that the type of construction used at the complex increased the risk of fire.(2)

In its defense, the developer maintains that the construction of the complex meets State fire and safety codes which, the company explained, are designed to provide occupants with sufficient time to escape a building in the event of a fire; not to prevent a building from burning down.(3)

The same developer has submitted a proposal to construct a 280-unit housing complex in Princeton, NJ. This recent fire has led officials from that municipality as well as from Mercer County to postpone their review of the development application and request from the State an emergent review of its current safety codes, including an assessment of the required location of sprinkler systems.(4)

In a separate development, NJ Assembly Speaker Vincent Prieto (D-Hudson/Bergen) announced plans to work with the State’s Department of Community Affairs to draft legislation addressing building codes for multi-family complexes, specifically in regards to stronger fire regulations. An experienced construction code official, Prieto said he would review current building codes to identify those areas that could use strengthening.(5)

Lightweight wood construction is commonly used throughout the State mainly because it is more cost-effective than other types of construction. However, although up to code, this method can make it easier for fires to spread quickly as is suspected in this case. This tragic event underscores the need for builders – both large developers and private homeowners alike – not only to adhere to the State’s fire and safety codes but perhaps to go a step or two further in protecting the lives and property of the building’s occupants.