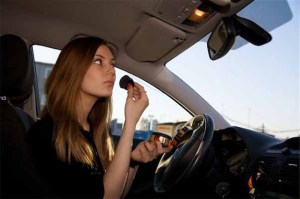 Despite the efforts of law enforcement agencies throughout the State to curtail distracted driving practices, New Jersey motorists admittedly continue to engage in some risky behaviors when behind the wheel. In fact, New Jersey drivers have been ranked as some of the worst in the country in terms of impatience, rudeness and engagement in risky driving habits.(1)

Records show that during the period from 2004 through 2013, there were about 3 million motor vehicles accidents reported in the State, of which 1.4 million involved inattentive drivers. What’s more, 1,600 fatalities occurring during that same period reportedly resulted from accidents in which distracted driving was cited as a major factor.(2)

While much effort has been made to halt the use of cellphones by motorists, especially handheld cellphones and texting on those devices, there are many other activities which can be considered distractions for drivers. The State’s Division of Highway Traffic Safety listed the following activities as being among some of the behaviors that could detract drivers’ attention from the road: applying makeup, tuning a radio or CD player, eating/drinking, talking to other passengers and tending to children and/or pets in the car.(3)

Recently, the Rutgers-Eagleton Poll joined forces with the Rutgers New Jersey Medical School to conduct a series of polls concerning public health issues, the first of which related to the risky behaviors of New Jersey motorists. Participants in the poll were asked to rank certain behaviors as to their level of danger from the perspective of both a passenger and a driver. Interestingly, the poll showed that even though drivers responding from the perspective of a passenger found certain behaviors to be very unsafe, they admitted to engaging in those same behaviors when they were behind the wheel.(1)

High on the list of distractions thought to be most dangerous from a passenger perspective was reading, with almost all of those polled saying being in a car with a driver reading a newspaper, book or tablet would make them feel very unsafe. Almost 90% of those responding thought reading text messages or emails was very unsafe; while 60% considered talking on a handheld phone very dangerous, although most participants admitted to being less concerned when drivers used hands-free cellphone devices. Slightly more than half of the participants ranked eating or drinking while driving as an unsafe behavior, but only 23% of those considered it very unsafe.(1)

As the poll responses confirmed, many people consider the use of cellphones when paired with hands-free devices to be less risky; however, there are studies to the contrary. An article published earlier this year cited one such study conducted by the University of Iowa Public Policy Center. In that study, the brains of participants were scanned as they steered a simulated motor vehicle while using a hands-free cellphone device. The scans showed that activity in the sections of the brain necessary for focused driving was reduced by 37%, which researchers stated led to something they called “inattentive blindness.”(1)

The number of distractions drivers face on a daily basis are too numerous for individual laws, and past attempts to broaden the scope of activities covered under distracted driving laws have been criticized as being too vague. However, New Jersey does have strong laws which prohibit the use of handheld cellphones by all drivers, under which such activity is considered a primary offense, meaning a police officer could cite a driver for this violation without any other traffic violation having been committed. Penalties for talking on a handheld cellphone or texting while driving in New Jersey increased this past July 1 to minimum fines of $200 for first offenses and $400 for second offenses. Drivers found guilty of a third offense now face a minimum fine of $600 plus three points against their license and a possible 90-day license suspension.(4)