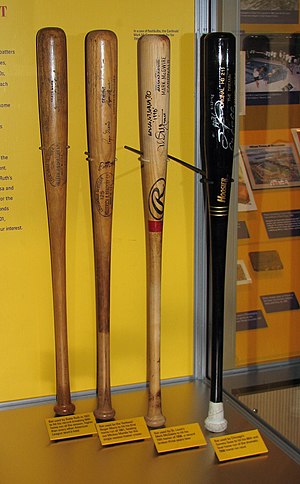 Professional baseball bats are typically made of ash or maple; hickory used to be popular, as well. (Photo credit: Wikipedia)

The family of a Wayne, NJ teen injured while playing baseball reached a settlement for $14.5 million in a lawsuit that questioned whether the use of metal baseball bats should be permitted in youth league games. (1) If, after reading the following, you need assistance with a similar situation, particularly in Hunterdon County, contact the personal injury lawyers at Ragland Law Firm of Lebanon.

In June 2006 Steven Domalewski, then 12 years old, was hit in the chest by a ball while pitching; the ball had been hit off of a metal bat. The ball hit Steven at the precise instant between heartbeats, sending him into cardiac arrest. Although CPR was administered quickly, Steven’s brain had been deprived of oxygen for more than 15 minutes. The incident left him brain-damaged and today, at age 18, he is still unable to perform daily functions independently. (1)

The Domalewskis filed a suit in 2008 against Hillerich & Bradsby Co., manufacturers of the Louisville Slugger bat; The Sports Authority, retailer that sells the bats; and the New Jersey Little League. (2) Although at the time of the accident Steven was playing in a Police Athletic League ballgame, the Domalewskis sued the New Jersey Little League because, according to the suit, that association allows the use of specific metal bats in youth games, implying they are safe. (1)

The Little League bans most metal bats for use by younger children, but does allow the use of certain bats that meet its testing standard. In the early 1990s, the association entered into an agreement with bat manufacturers to limit the performance of metal bats. As a result, the association reported in 2008, batted ball injuries to pitchers declined from 145 a year to about 20 to 30 a year since the agreement. (1)

Part of the popularity of metal bats is that they are less likely to break than their wooden counterparts and, therefore, are more cost-efficient. The controversy stems from the fact that metal bats, being lighter, make it easier for batters to hit more powerfully, making the ball travel faster.

Although injuries from batted balls are not common, Steven’s is not an isolated case. In March 2010, a 16-year-old Californian, Gunnar Sandberg, suffered severe brain injuries when he was hit in the head by a ball batted off an aluminum bat. That incident lead one California Assemblyman to introduce a bill calling for a one-year moratorium on the use of aluminum bats in California high schools. New York and North Dakota are two states that passed similar bans in the wake of similar accidents. (3) In New Jersey, several counties banned the use of metal bats in youth games.

The settlement will help pay for the medical treatment Steven will likely need for the rest of his life. It is also hoped that it will serve as a warning for those associated with youth baseball to not promote the use of metal bats in games involving children. (2)

If you need the assistance of an attorney for injuries suffered by you or your children, contact the personal injury lawyers at Ragland Law Firm.