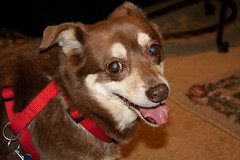 The batteries died in my speedlite and Ginger thought it was now safe to look into the camera and smile. BURN! Pop up built-in flash! (Photo credit: colorblindPICASO)

You may consider Rover a member of the family, but the NJ State Supreme Court does not, at least when it comes to awarding emotional damages. If, after reading the following, you need the assistance of a Hunterdon County lawyer with an emotional damages lawsuit, contact the personal injury attorneys at Ragland Law Firm in Lebanon, N.J.

The ruling stems from a case first reported in this blog in August 2011. The case was filed by Joyce McDougall, who, while walking her Maltese-poodle mix in a Morris Plains neighborhood, witnessed the dog being mauled to death by another, larger dog. The owner of the second dog, Charlot Lamm, admitted liability. McDougall filed a lawsuit seeking the cost of replacing her dog as well as emotional damages from witnessing the attack. (1)

In the initial hearing, the court awarded McDougall $5,000, which exceeded the cost of replacing her dog, an expense estimated at $1,395. (2) The court added, however, McDougall was not entitled to recover emotional damages, because such claims were reserved for cases involving human family members. This decision was later upheld by the Appellate Court and more recently by the State Supreme Court. (3)

The Court stated these restrictions were necessary in order to control the number of lawsuits. By releasing the restrictions, people could conceivably claim emotional damages from the loss of anyone or anything they have had a relationship with. (2) Defining a pet as a companion animal does not make a difference either, according to the court, because there are human companions, such as caretakers, for which such damages cannot be recovered. (3)

New Jersey is not alone in its view of the relationship between owner and pet. In fact, most states share this view, however, exceptions include Illinois and Tennessee, which allow distress claims. Such claims also have been recognized in Louisiana, Florida and Hawaii. (3)

New Jersey laws covering emotional loss are very specific. If you or someone you know needs assistance with such a case in Hunterdon County, contact Ragland Law Firm personal injury lawyers.