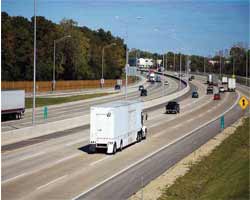 A lawsuit has been filed against Walmart Stores, Inc. claiming that the retailer’s negligence was a major contributing factor in a previously-reported accident on the New Jersey Turnpike that left one person dead and three others, including comedian Tracy Morgan, injured.(1)

This accident, which occurred on June 7, has brought to light the issue of driver fatigue and its impact on long-distance truckers in particular. It had been reported that the driver of the Walmart truck involved in the accident had admitted to not having slept in the 24 hour period immediately preceding the accident, a violation of New Jersey law. Further, it was reported that the driver had been “on the job” for more than 13 hours prior to the accident. Federal law limits drivers to a 14-hour work day, with a maximum of 11 hours at the wheel between rests.(2)

According to accident reports, the truck driver was travelling at a rate of 65 miles per hour immediately prior to impact. The stretch of the Turnpike where the accident occurred has a 55-miles-per-hour posted speed limit which, at the time of the accident, was reduced to 45 mph due to construction. This construction had caused the chauffeured limousine carrying Mr. Morgan and his friends to slow down before it was struck from behind by the Walmart truck. The impact pushed the limousine into six other vehicles.(2)

The truck driver was not named in the lawsuit but is facing charges of vehicular homicide, reckless driving and assault, to which he has pleaded not guilty. Rather the lawsuit focuses on Walmart’s decision to assign the driver, who lives in Georgia, to a distribution facility 700 miles away in Delaware, claiming that the assignment was “unreasonable” especially in light of the fact that the company operates a number of other distribution facilities in closer proximity to the driver’s home. Walmart, the lawsuit contends, should have recognized that it was unreasonable to expect a driver to make such a long commute immediately prior to his shift where he would be operating a 30- to 40-ton truck. This negligence, the lawsuit claims, was a major factor in causing the injuries suffered by passengers of the limousine.(3)

It was further pointed out in the lawsuit that the automatic braking system installed in the truck and intended to help prevent accidents like that one that occurred was not operating properly at the time of the crash. No explanation has been given as to why this safety system failed.(3)

Plaintiffs in the lawsuit have requested a jury trial and are seeking both punitive and compensatory damages from the retailer. Representatives from Walmart have not commented on the lawsuit but have said the company was fully cooperating with the accident investigation.(2)