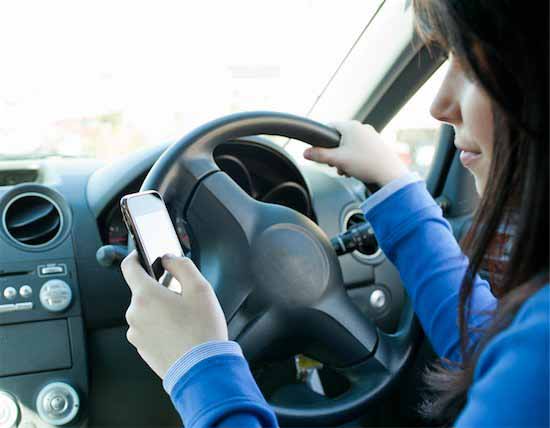 Effective July 1, fines for a first-time offender were increased to between $200 and $400 from $100. Anyone guilty of a second offense of texting while driving now faces fines between $400 and $600, and a third-time offender faces fines of between $600 and $800, plus a possible 90-day suspension of his or her driver’s license and three points against his/her driving record.(1)

The increased penalties are part of an effort being made to help stem what has been dubbed “New Jersey’s Distracted Driving Decade.” A report issued this past spring disclosed that driver distractions were a major contributing factor in 1.4 million motor vehicle accidents on State roadways during the period from 2004 through 2013, representing about half of all crashes that occurred in that timeframe. In the decade from 2003 through 2012, more than 1,600 people were killed in crashes where inattention of the driver was listed as a major contributing factor.(2)

According to the report, although the State has seen a decreasing trend in the overall number of motor vehicle accidents and related fatalities, there has been an increase in both the number and proportion of crashes attributed to distracted drivers. In an effort to help reverse this trend, funds were made available through the Division of Highway Traffic Safety to help law enforcement agencies throughout the State enforce New Jersey’s distracted driving laws under a campaign titled “U Drive. U Text. U Pay.” The funds helped to finance increased patrols and driver checkpoints. The increased penalties cited above are also part of this effort.(2)

The change in penalties were signed into law by Gov. Chris Christie last year, but only took effect last week. This new law does not take into consideration drivers who text or talk on a hand-held cell phone while stopped in traffic or sitting at a red light. Separate legislation is currently being considered to address those drivers.(3)

The new penalties come into play about one-third of the way through what is referred to as the “100 deadliest days” for teen drivers, the period between the Memorial Day and Labor Day holidays. During that period last year, 12 fatalities were reported in connection with accidents involving teen drivers on New Jersey roadways; nationwide, the number of fatalities was more than 1,000 for the same period. Reports indicate that car crashes continue to be the leading cause of death for teenagers in the U.S.(4)

The reason summer months are so dangerous for teen drivers is, in part, the simple fact that they have more free time in which to be on the road. New Jersey has strict laws regulating first-time drivers under its Graduated Driver’s License Program (GDL) which, among other things, prohibits the use of cell phones — both hands-free and hand-held — and restricts the number of passengers teen drivers can have in their cars. However, law enforcement officers frequently see those regulations broken as teens drive more miles with less supervision during summer months, which sometimes can lead to deadly consequences. New Jersey State Police reported that as of June 2 of this year, there were 21 fatal crashes involving drivers and passengers age 20 and younger on the Garden State Parkway.(5)

Data released by the National Highway Safety Administration, as analyzed by the AAA Foundation for Traffic Safety, disclosed that teenage girls were more likely to engage in distracted behaviors while driving than teenage boys by almost 10% and were twice as likely to use electronic devices, including cell phones, than teenage boys were. Teenage boys, on the other hand, were twice as likely to take their eyes off the road by turning around in their seats while driving and were more likely to engage with others outside of their vehicles while on the road. The most common distraction for both sexes were electronic devices, including cell phones, and usage of these devices increased for both boys and girls when they were alone in their cars.(5)

Three years ago, Somerset County law enforcement officials, together with local high schools, community groups and Robert Wood Johnson University Hospital Somerset, began a campaign entitled “Put It Down,” putting the county on the front lines in the battle against distracted driving behaviors. The campaign, which continues today, includes putting increased patrols on the road on alternating days each month in an effort to enforce the State’s distracted driving laws. Drivers issued summonses as a result of the increased patrols will now be subject to the newly instituted fines and penalties. About half of the funds collected under the new penalty schedule will be used by the State Motor Vehicle Commission to further driver education programs concerning the dangers of texting while behind the wheel.(1)