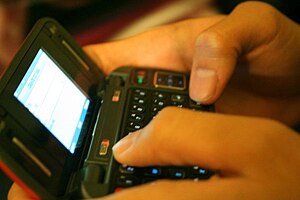 By now most people are aware that distracted driving – particularly talking or, perhaps worse, texting on cell phones – is to blame for an increasing number of motor vehicle accidents. Studies show texting drivers have a slower reaction time than even those with the legal alcohol limit in their systems and that distracted drivers are more likely to be involved in accidents than non-distracted drivers.(1) But what role does the person on the other side of the phone play? That’s the question one New Jersey couple is asking the courts to address.(2) If, after reading the following, you need a Hunterdon County lawyer to assist you with a similar motor vehicle violation, contact the personal injury attorneys at Ragland Law Firm in Lebanon, N.J.

On Sept. 21, 2009, David and Linda Kubert were riding their motorcycle when they were struck by a pick-up truck driven by then 18-year-old Kyle Best. Each of the Kuberts lost a leg as a result of the accident. Police later determined Best was looking at his cell phone at the time of the crash. He was cited for careless driving, failure to use a hands-free device, and making an unsafe lane change. He pled guilty and was ordered to pay fines of $775 and address 14 high schools on distracted driving dangers; he was allowed to keep his driver’s license without suspension however. (2)

Lawyers for the Kuberts now say the woman who sent the text message “aided and abetted” Best’s recklessness by texting when “she knew or should have known” he was driving. Attorneys for the woman countered that she had no control over when her message would be read and, therefore, has no liability. Unlike a passenger who may encourage a driver to violate or ignore traffic safety issues, the woman had no such control since she was not in the car at the time of the crash. (2)

New Jersey is currently seeking to toughen these laws. There are about six bills up for consideration this session. One of those bills is named after the Kuberts and Helen Kulesh, an 89-year-old woman who was killed after being hit by a driver talking on her cell phone.(4) The bill calls for increasing the fines from the current $100 to a graduated system starting at $200 and increasing to $600 for repeated offenses, plus a 90-day license suspension and three points after the third offense. In addition, the bill would make it possible for drivers to be charged with vehicular homicide or assault by vehicle if the accident resulted in any deaths.(3)

If you or someone you know needs assistance with a distracted driving violation, especially in Hunterdon County, contact the personal injury lawyers at Ragland Law Firm located in Lebanon, N.J., which is in close proximity to Clinton and Flemington.