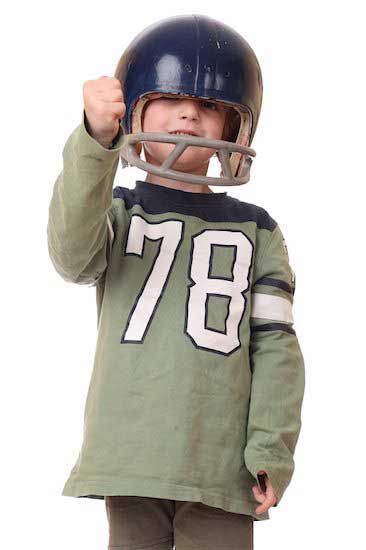 Recent headlines regarding the after effects of head injuries sustained by former professional football players has brought the issue of concussions and youth athletes into the focus once again. Just last week, Hall of Famer Tony Dorsett disclosed that he was suffering from the early stages of a degenerative brain disease – chronic traumatic encephalopathy (CTE), which has been linked to repeated brain injury.(1)

Dorsett is the third living pro football player known to be suffering from CTE and was one of thousands of players who filed suit against the National Football League over injuries related to concussions. Those players received a $765 million settlement from that suit this past August.(1)

If concussions could have such devastating effects on professional athletes, what effect could they have on children whose bodies and brains are still developing? Much attention has been given over the past 10 years to the dangers of head injuries that certain sports pose for our children, leading 49 of the 50 states in this country to pass laws regulating treatment of concussions.(2)

Under New Jersey’s law, which took effect in the 2011-2012 academic year, public school districts, non-public schools and charter schools are all required to institute a policy addressing plans for prevention and treatment of concussions and other head injuries resulting from sporting activities. While other, non-school athletic organizations, such as soccer and football associations and Little League, are not covered by this law, they are urged to follow its guidelines.(3)

The required policy should outline steps to be taken if a child suffers a concussion or other injury to the head. Other stipulations of the law include:

• All student athletes are to be given material, which is to be signed by their parents, educating them on the signs and dangers of concussion;
• Every student thought to possibly have a concussion is to be removed immediately from the game or practice;
• Students removed from play due to head trauma will not be allowed to return until cleared by a doctor; and

Despite all the attention and these regulations, evidence shows there is still resistance to reporting head injuries among student athletes. A panel sponsored by the Institute of Medicine and National Research Council to discuss the risk of concussions in children’s sports is now promoting the need for a national system to monitor the occurrence of concussions in relation to sports activities.(2)

Recent reports show 250,000 children age 19 and younger received emergency room treatment for concussions and other brain injuries related to sports in 2009, an increase of approximately 66% from the 150,000 who sought treatment in 2001. The rates at which student athletes are injured depend on the sport they play. For high school and college male athletes, football, ice hockey, lacrosse and wrestling had the highest rates of concussion. For female athletes, ice hockey had the highest rate, followed by soccer, lacrosse and basketball.(2)

Although high schools and colleges attempt to track these injuries, there is evidence that not all such injuries are reported. Individual athletic departments vary on how much attention they give to this issue and students themselves avoid admitting to injuries for fear of being criticized by coaches and teammates or letting their team down. Also this data is not kept for younger athletes who play on community leagues or school teams.(2)

The panel noted that athletes who suffer one concussion are at greater risk of sustaining subsequent injuries and suggested the implementation of age-specific rules could possible make some sports safer. The panel also noted that the health benefits of participating in sports outweigh the risks provided safety precautions are followed.(2)