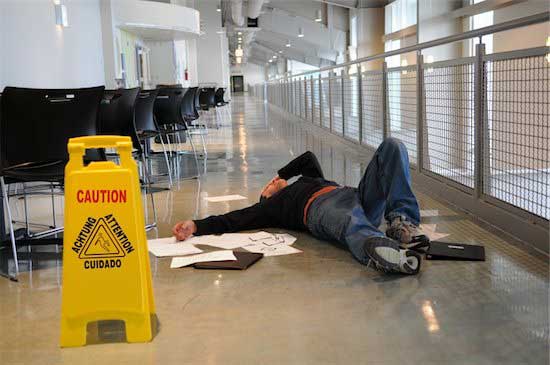 Proving liability in a slip and fall injury is sometimes difficult as evidenced by two recent appellate court decisions:

The first case involved a suit by a man who was injured in a fall suffered as he walked on a wet, carpeted footbridge at a Bridgewater golf course. The injured man filed suit against both the Somerset County Park Commission and operators of the golf course, claiming they neglected to provide a safe walkway for pedestrians and, therefore, were liable for his injuries. That claim was rejected by a lower court and the victim appealed that decision.(1)

Last month the appellate court sided with the lower court citing The Landowners’ Liability Act, a New Jersey law that gives immunity for properties that are set aside for recreational and sporting activities. According to the appellate court, that Act applies to rural and semi-rural parcels of land even if that land is used in connection with a commercial business.(1)

The second case involved a county worker who was injured after tripping on the sidewalk while returning to her office after lunch. That employee’s suit, which named the town of Belvidere and Warren County, claimed they failed to maintain the sidewalk adjacent to her office and that failure led to her fall and subsequent injury. While Warren County admitted to having control of the sidewalk where the injury occurred, it argued that the woman should have filed a claim for workers’ compensation rather than a lawsuit.(2)

The trial judge agreed with the county and dismissed the case. The appellate judges upheld the trial judge’s ruling noting that workers’ compensation insurance covers injuries that occur in the workplace, including outside areas surrounding the workplace, during working hours. The lunch hour, according to the judges, is considered part of the workday.(2)

Generally, there are a number of factors needed to prove liability in a slip-and-fall injury case:

• The property owner did something that caused the hazard, i.e., caused a spill or left debris in the pathway.(3)

When a court hears a slip-and-fall injury case, it not only considers the responsibilities of the property owner, or property user in cases of rental properties, but also your responsibilities in the accident. Some accidents are the result of a person’s own clumsiness and courts will consider “comparative negligence” when deciding slip-and-fall cases to determine how much the victim’s actions contributed to the accident.(3)

Courts will look at such factors as whether the victim had a reason for being on the property at the time of the accident; if he or she was distracted and, therefore, failed to notice the hazard that an otherwise reasonable person would have noticed; and if the victim ignored warning signs that the property owner may have set up around the hazard. The extent to which your own actions contributed to the accident could have an impact on the amount of damages you can recover.(3)

Simple slip-and-fall accidents are anything but simple. There are numerous factors to consider when deciding liability and whether or not there is even a case to pursue. An experienced personal injury lawyer can help you sort through all the factors surrounding your individual situation.