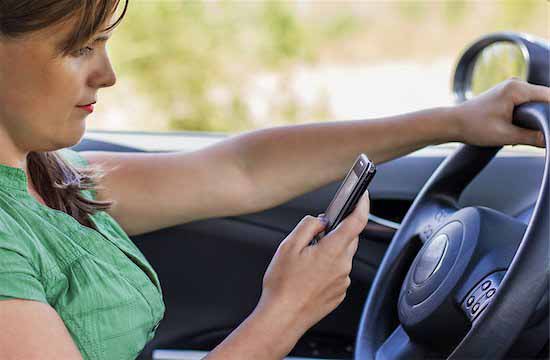 Tomorrow begins National Distracted Driving Awareness Month and law enforcement officials in Somerset County as well as other communities will step up efforts to ensure motorists keep their eyes on the road. (1)

Distracted driving is defined as engaging in any activity that takes the driver’s attention away from the road and that could include everything from watching videos to reading (including maps), grooming (shaving, applying makeup), talking to passengers, minding the kids, and eating or drinking. It is the use of electronics devices, however, that is seen as perhaps the most prevalent and troubling distraction. (2)

Studies have shown that using a cell phone has the same effect on a driver’s reaction time as having a blood alcohol content of 0.08%, which is the legal limit. (1) The New Jersey State Police have pointed to the increased use of electronic devices — including not only cell phones, but navigation systems, tablets and even satellite radios — as posing the greatest challenge to preventing fatal accidents. (3)

One reason cell phone use, particularly texting, is so dangerous is that it requires the use of a driver’s eyes and hands as well as his or her cognitive skills. Whether receiving or sending a text, it requires the driver to take attention off the road for an average of more than four and a half seconds. While that may not seem like a long time, it is about how long it would take a driver travelling at 55 miles per hour to drive the length of a football field. Texting while driving is like travelling that distance blind. (2)

Although there has been a slight decrease in the number of fatal distracted-driving related accidents recently, the numbers are still high. National statistics show that deaths due to distracted driving fell in 2012 to 3,328 from 3,360 in 2011. Injuries from distracted driving related accidents, however, rose by 9%, totaling an estimated 421,000 in 2012, from 387,000 in 2011. (1) New Jersey reported an 8% decrease in traffic accident fatalities in 2013 from 2012, most of which were attributed to drinking and driving. (3)

Despite those numbers, drivers continue to text or otherwise fiddle with electronic devices while driving. In fact, studies have shown that at any given moment during the day, about 660,000 drivers use cell phones or other electronics while behind the wheel. Young drivers tend to be more affected by distracted driving than their older counterparts, as highlighted by the following statistics:

• 10% of parents admit to engaging in extended text dialogues while driving versus 20% of teen drivers;
• one fourth of teen drivers say they respond to texts at least once every time they are behind the wheel;

• of those drivers under 20 years old involved in fatal car crashes attributed to distracted driving, 21% were distracted by cell phone use. (2)

New Jersey officials take a serious stand against distracted driving. In New Jersey, it is illegal to use a cell phone while driving without a hands-free device. For drivers with learner’s permits or probationary licenses, it is illegal to use any electronic communication device, either handheld or hands-free. In 2012, State lawmakers adopted a law making it a criminal offense if a handheld electronic device was used resulting in an accident that caused the death or serious injury of another. Penalties for such an offense include a jail term of up to ten years and fines of up to $150,000. (1)

Law enforcement officials throughout the area urge all drivers to pay careful consideration to the country’s “U Drive, U Text, U Pay” campaign not only throughout National Distracted Driving Awareness Month but whenever they get behind the wheel.