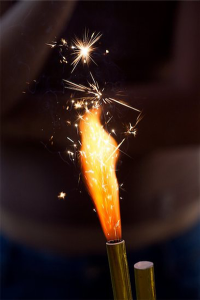 As Fourth of July approached, the New Jersey State Police issued a reminder to State residents that the use of fireworks without the appropriate permits is illegal in New Jersey: “Slow Down and Leave the Fireworks to the Pros.”

Despite these efforts, hospital emergency rooms throughout the State, as well as the rest of the country, are filled each year with people injured by fireworks, and this year was no different. The recent headlines underscore the potential dangers: “Man dies shooting fireworks off head;” “Giants’ Jason Pierre-Paul ‘severely’ injures hand in fireworks accident…” and, on a more local front, “Man loses part of his leg in fireworks accident.” These are just some examples of serious accidents that occurred over the July Fourth weekend.

Although fireworks have become synonymous with Fourth of July celebrations, they are common with other events throughout the summer. If reports like those mentioned above are not enough to encourage you to leave the fireworks to the professionals, the risk of facing criminal charges for selling, using or even possessing fireworks in New Jersey should be.