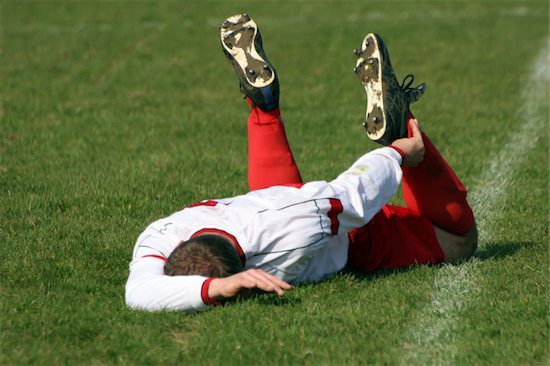 Although most area schools won’t start classes for another couple of weeks, preseason is in full swing for their fall sports teams. Participation in school sports can benefit our children’s health, self-confidence and social development. That same participation, however, can lead to serious injuries unless necessary precautions and safety guidelines are followed.

According to statistics from the American Academy of Pediatrics and Safe Kids USA/Worldwide:
• more than 30 million children play sports annually;
• over 3.5 million, age 14 and younger, are treated for sports-related injuries; (1)
• 1.35 million student athletes ended up in the emergency room last year; (2)

• most injuries — 62% — occur during practice sessions, not the actual sporting event. (1)

Student athletes face a variety of types of injuries, especially this time of year. Overuse injuries are common with children who enter the rigorous schedule of preseason practices after several weeks of summer leisure. The risk of overuse injury increases drastically for children who are out of shape, compared with those who kept in shape prior to preseason. (3)

Since preseason for fall sports usually begins by mid-August, it is not uncommon for practice sessions to take place during a heat wave. As a result, heat-related injuries are a major concern. The National Center for Catastrophic Sports Injury Research reports that since 1995 at least 31 football players died from heat stroke. (4)

Concussions also deserve careful attention. Sports with the most physical contact, such as football, wrestling and even cheerleading, have the highest risk of brain injury. Concussions accounted for 14% of the injuries suffered in high contact sports; children between the ages of 12 and 15 accounted for 47% of those injuries. While not as many girls participate in high contact sports as boys, girls’ athletics can be very dangerous, due mostly to their weaker ligaments. In fact, girls are eight times more likely than boys to incur ACL (anterior cruciate ligament) injuries. (2)

Despite these numbers, statistics show that about one-third of parents don’t encourage their children to take the same safety precautions during practice as they do during a game or sporting event, and that even some coaches and schools fail to take practice sessions as seriously as they do the actual sport contest. (1)

Laws, recommendations and guidelines are in place to help reduce the number of sports injuries.

Overuse Injuries — Students are encouraged to start getting in shape a month or two before preseason starts and to change the type of sports they play throughout the year. (3)

Heat-related Injuries — The New Jersey State Interscholastic Athletics Association’s (NJSIAA) list of acclimatization guidelines include not wearing full pads during the first three days of practice and keeping practice times below five hours per day. According to the NJSIAA, practices include warm-ups, weight training, stretching and conditioning activities and cool down periods. In addition, one New Jersey athletic director recently proposed student athletes remove their helmets when not involved in activity. Helmets can trap heat, keeping body temperatures high. Removing the helmet allows sweat can evaporate through the head, lowering body temperature and decreasing fatigue. (4)

Concussions — New Jersey law states that a student who suffers a concussion during a game or practice must be pulled from sport and not return until cleared by a doctor or health professional. More serious injury, and even death, can occur if a child suffers a second hit before fully recovering from his or her initial concussion. One of the biggest problems is in misdiagnosing a concussion. Not all concussion victims experience unconsciousness. Symptoms to look for include headache, nausea, sleeplessness, irritability and memory loss. (5)